What is the latest news from Crown?

Since the last meeting quite a lot has happened. Our website has been remodeled, we have a new iOS wallet (we’re one of only a handful of projects that have one), we removed darksend, and have put systemnodes into testnet. We hired two new developers Artem Brazhnikov and Ashot Khachatryan to work on Crown Atomic and systemnodes. Systemnodes are an important piece of Atomic.

We have added an Australian ambassador, a Spanish ambassador, and a Ukranian ambassador. We now have a Latin American team led by Jerry Ruiz who are making substantial progress spreading adoption. We have a new zendesk team in place to help with troubleshooting available on the home page of Crown.tech. I am also now working full time on the project doing Communications and PR.

Systemnodes will allow for better time keeping on the network and various other potential services which will allow the network to handle a larger capacity and improve the speed and security of the network. PoW miners have had their return reduced by 10% for systemnodes which will only require 500 CRW as collateral. This collateral level was set to be 1/20th of the masternodes because we want to have many more systemnodes on the network and want to incentivize the larger crypto community who may not have the $12.5k for a masternode but still want to participate by owning a node. To further incentivize them these nodes get a larger percentage of the block reward masternodes do (10% vs 50%).
new version of crowncentral.net

Crown is essentially trying to build a cloud startup incubator in which businesses are built on top of Masternodes. The blockchain will act as a ledger that will tie customers and businesses together. Systemnodes will similarly be servers on the network set up exactly like Masternodes, but they will not act as businesses. Systemnodes will offer various services to help the network run. The first service it will offer is time keeping to make the block times exactly on time.

A Systemnode is a server on the Crown network that is secured by collateral and provides services that support applications and services published via Crown Atomic. The operator of a Systemnode will be rewarded a portion of the block reward in return for providing those services.

Under the Crown Atomic architecture, Tron Masternodes are focused on transaction confirmations and application verifications.  In order to provide any services, there is a requirement for a swarm of application provider nodes.  These are Systemnodes.

How many Systemnodes will there be?

Are there other benefits to Systemnodes?

An ideal community should have more small token holders than large token holders.  The price of a Tron Masternode has exceeded $15,000 which is far too high a cost of entry to participate on the Crown network. The decision has been made to require smaller collateral for a Systemnode and to offer a greater relative reward for operating a Systemnode compared to a Tron Masternode in order to encourage more people to participate and join the Crown community.

What kind of tasks will Systemnodes perform?

The possibilities are endless.  The core team will release NTP timekeeping as the first Systemnode service in order to cater for the future planned consensus mechanism change.  The community will be free to develop their own utilities for Systemnodes to perform.

How much will it cost to run a Systemnode and what is the reward?

The Crown Core Team does not advise that a Systemnode or a Tron Masternode is an investment.  The value of Crown tokens might go down. Past value trends do not indicate future performance.  The number of Crown tokens that you receive for operating either kind of node will vary according to the number of nodes on the network at the time.

A Systemnode will require 500 CRW collateral and will receive 10% of the block reward.  This change will be at the expense of the miners.  The block reward can be summarised as follows:

What is required to run a Crown Systemnode from a technical perspective?

A unique IP is required for a Systemnode.  Each community member will be able to run one Systemnode in their local wallets if they choose, but a VPS is recommended as the prefered platform as the Systemnode wallet must be online 24/7 to provide services and receive rewards.

At this time, a single core 512Mb RAM VPS with 20GB of storage is the recommended minimum.  It may be possible to use less but this will not be supported by the core team. In the future, as usues grow, the hardware requirements will increase significantly.

A breakdown of possible Systemnode rewards is shown in the spreadsheet that partners this document.

How will the Crown Network change?

We expect the chance to participate in the Crown network with less collateral than a Tron Masternode and generous rewards to be attractive to a lot of crypto enthusiasts and small businesses alike. The expectation is that a large number of Systemnodes will be set up.

It is difficult to guess where that equilibrium will be but the intention is for there to many more Systemnodes than Tron Masternodes.

We have decided to name the node equilibrium point the “Zuck Equilibirum” in honour of the person who devised the mechanism for the Tron and Systemnode relationship.

When will Systemnodes be released?

Systemnodes are already in the Crown testnet undergoing public testing.  Systemnodes will be released during November 2017.

What are Tron Masternodes? 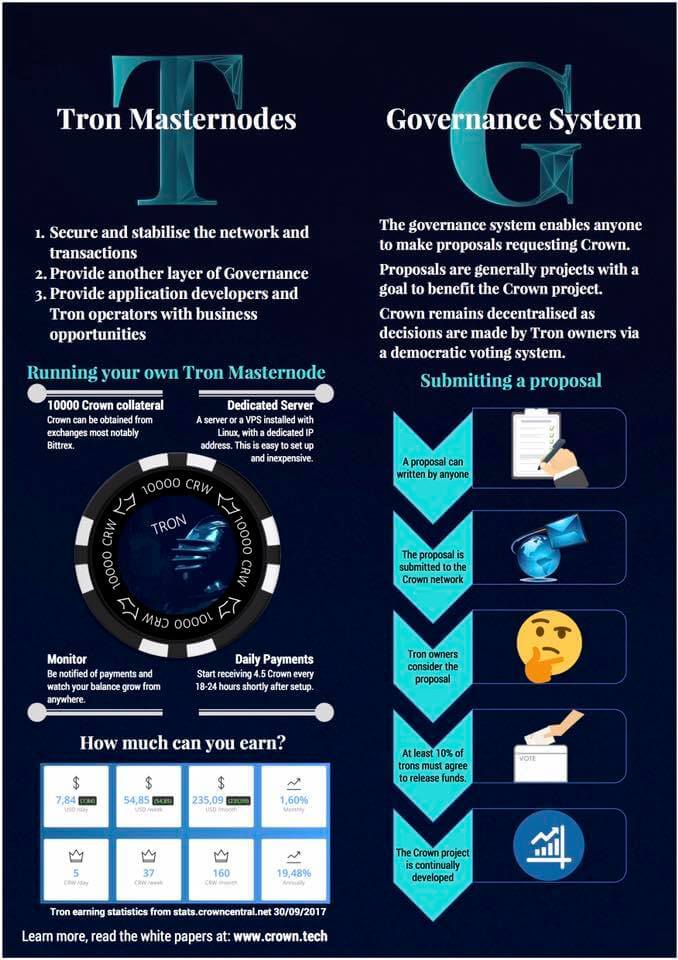 What is the cloud startup incubator?

Crown Atomic is the cloud start-up incubator. Crown businesses operate on the Tron masternode structure. Businesses run on the servers that operate the masternodes allowing for a network of cloud businesses. Crown will provide the legal framework for businesses to operate and the KYC/AML for both the business administrators and their customers. It gives people the means to have their projects and ideas funded through the proposal system and the community provides the support and resources for their ideas to succeed.
Crown already has a strong community that are holding Crown tokens and are itching for real world applications for them to spend their tokens on. Businesses will have support from the network to build what they are envisioning. The early businesses will have a monopoly on whatever services they are providing within the network. As the network and the community grows competition will spring more businesses offering better services and cheaper prices. CRW (the token) will act as barter for the businesses built on the Crown network.
This framework allows for an infinite number of possibilities to be built on Crown. It can be more difficult to understand when technical jargon is the primary language being used, but it doesn’t have to be that way. Crown is a vehicle to enable individuals by allowing them to use their creativity and dreams to build anything they can imagine. Once the infrastructure is built and the communication is clear, Crown can operate as a self-regulated economy; it’s own sandbox city.

Why is time keeping on the network / blockchain important?

When will the first Tron based business be launched?

We don’t have a release date for the first Tron based business. They are being worked on now, but the API will likely be released some time in the next few months and there are already businesses waiting to make the move to Atomic.

5 Reasons Why Debt Is Good