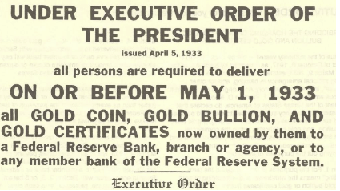 Throughout the money crisis of 1933 that culminated in the banking holiday in March 1933. During this time massive amount of gold circulated out from the Federal Reserve and into the hands of  the people, companies and foreign nations. These feared a devaluation of the dollar.

In March 1933, the Federal Reserve System Bank of New York the outflows became too much and President Roosevelt declared a national banking holiday.

On April 5, 1933, President Roosevelt signed Executive Order 6102 making the hoarding of gold certificates, coins and bullion smuggled. FDR was acting on the advice of  an economic expert, George Warren, who believed that the most effective way to solve a deflationary depression was to inject some inflation and push prices higher.

What was the purpose of executive Order 6102?

President Roosevelt issued Executive Order 6102 in 1933 during the Great Depression requiring citizens to surrender their gold for which they were reimbursed. In order to make the seizure legitimate, the United States government required the delivery of all gold coin, bullion, and certificates to be concluded by May 1, 1933, in exchange for $20.67/ounce.

Months later, the new, official gold exchange value became $35.00, which remained until 1971 when the possibility to exchange dollar to gold was drained by President Nixon. In essence, Roosevelt devalued the dollar by 70% overnight by raising the value of gold from $20.67 to $35 after confiscating gold.

When FDR confiscate gold, it enacted the subsequent rules:

Refusing to hand over the gold

Few weeks after President Roosevelt order the banking holiday was over, but the banking crisis wasn’t. Many folks queued at the banks asking for their savings be returned to them. There were a couple of exceptions that allowed people who use gold as a part of their profession, like the dentist and those who worked in art or jewelry to keep enough amount of gold in their possession.

As a result of Executive Order, U.S. citizens could not legally own gold from 1933 until 1974. The American individuals had been deceived. For the first time in history, people would be forced to use and settle for paper dollars whether they wanted to or not. Government did nothing illegal, because each person was reimbursed for his gold, even though with lower price than it used to be.

The government wanted to spend more cash than it had and also the banks wanted to loan out more money than they had. Together they continued to inflate the dollar as long as gold wasn’t used as backing for currency. There was nearly no limit on how much money could be created and lent with interest. The irony was in the proven fact that although the dollar was still backed by a small fraction of gold, the citizens were unable to exchange their paper for a gold coin.

Was all the gold turned to the government? What did individuals do?

It’s documented that an extra 9.8 million ounces of gold were taken out of circulation in 1932, well before gold confiscation was enacted. Beyond any doubt, a lot of this gold was taken out of the banks by people that had concerns regarding what was coming and were worried about the approaching devaluation of the dollar. A lot of this gold was stashed away or sent overseas. Though many folks felt it was absolutely loyal to turn in their gold, several individuals did refuse to turn in their gold and, apart from one case, weren’t prosecuted.

People actually turned in 21.9 (Nabers &  Chongchua, 2009)  of the gold that was antecedently in circulation. The government wrote off the rest as lost or destroyed. However a couple of years later once gold possession was allowed again, an equivalent amount of gold was miraculously found and created. In rare coin shops all across the country, you could notice gold coins that were dated 1933 or earlier. This can be proof that proves that there have been many citizens that didn’t fall prey to those that were attempting to get something for nothing.
A number of these men filed suits against the government, professing that this government order was fully against certain mandates and personal freedoms found in the Constitution. None of those lawsuits against the government ever resulted in the plaintiff’s favor.

In September 26, 1993 a person wanted to withdraw his gold (160kg), which he had deposited at Chase National was a New York lawyer called Frederick Campbell (Time Magazine). Once Campbell tried to withdraw the gold Chase refused and Campbell sued Chase. A federal public prosecutor then indicted Campbell for failing to surrender his gold. Ultimately, the prosecution of Campbell was unsuccessful, however, the authority of the federal government to seize gold was upheld, and Campbell’s gold was seized.

Besides the Campbell case, some compelling and famous are the next four cases noted thenceforth as “The gold clause cases”, which came before the Court and questioned the validity of the series of actions that had begun with President Roosevelt’s Executive Order 6102 of April 5, 1933. In all four cases, full compensation was guaranteed by shaping the value of the dollar at the equivalent of a “standard” gold coin of 25.8 grains. The Gold Clause Cases were a series of actions brought before the Supreme Court of the U.S, in which the court narrowly upheld restrictions on the possession of gold enforced by the administration of U.S President Roosevelt so as to fight the Great Depression.

It was estimated that 50% of the gold in private citizen’s hands was collected. The rest was either buried or illegally sent out of the country. An estimated 500 tons of gold were taken over as a result of this Executive Order. Executive Order 6102 made it illegitimate for Americans to possess gold. (RCW Financial, 2012).

Roosevelt’s actions ultimately caused over $1.59billion in U.S gold coins to be melted. The FDR’s inflationary policies worked, and the nation shortly began to pull out of the Great Depression. It absolutely was not until the World War II’s outbreak that the state saw full economic recovery. The price of the gold remained in effect until August 15, 1971 (as it was stated by Executive Order 6102), when President Nixon declared that the United States is abandoning the gold standard. The Executive Order 6102 continued to exist until President Gerald Ford issued another order on December 31, 1974. The new order allowed the U.S. citizens to purchase, hold, sell, or otherwise deal with gold in the United States or abroad with an act of Congress codified in Pub.L. 93–373.

However, what many people don’t realize is that even though the freedom to have gold was restored in 1974, a provision of the Federal Reserve Act was retained that allowed the Secretary of the Treasury to require people to surrender their gold. The law that enables the government to confiscate American’s gold continues to be on the books. 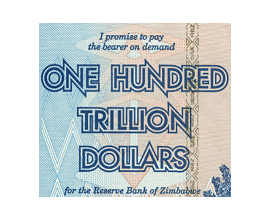 Love Trading? 5 BTC Up For Grabs

Better Safe Than Sorry: How High-profile Hacks Are Stimulating Insurance For...

LinkedIn Vs. Facebook: Which Is Best For Your Start Up