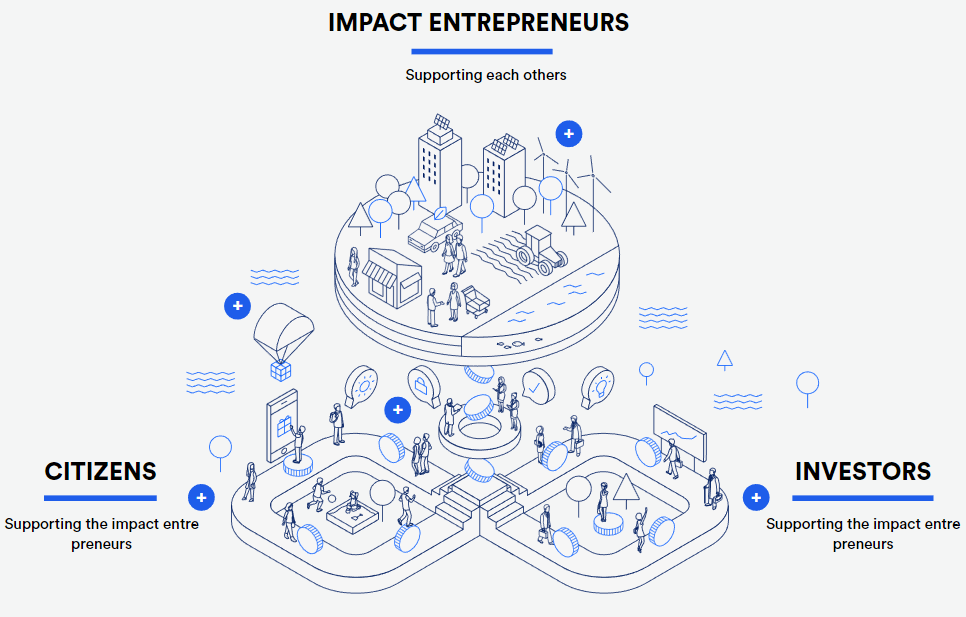 The ICO for the impak Coin (MPK), a new cryptocurrency with a social purpose, will fund the development of impak.eco, an online social network 100% dedicated to the Impact Economy.  This fast growing segment of the general economy is composed of organizations and individuals that share the belief that economic activity should consider more than just its financial aspects, but also take into account the effect it has on people and the planet.

impak Finance Inc. is the entity designing and developing impak.eco. Its plans also include the creation of a new digital Canadian Bank 100% dedicated to the Impact Economy that would be placed at the centre of the ecosystem and act as an agent of economic growth within this space.

At its core, this project proposes to radically change the way people experience their relationship with money by proposing a unique place where investors, companies and individuals exchange with each other with the understanding that each dollar has the purpose to do good. impak.eco shares features found on social networks and in disruptive fintech applications and aims to become that place one comes back to on a daily basis. With the focus being on the growth of the Impact Economy, every money transaction, whether it is banking, investing, selling or buying value-aligned responsible products & services, is done with the transparency one would expect in a changing world where the power of capital resides not only in the hands of the few, but also in the hands of the many. And where the power of capital serves values that make the world a better place.

This new cryptocurrency, impak Coin, is unique because it is one of the only digital currencies with a social purpose. Traditionally, complementary currencies have been created to promote and sustain local economies, sometimes in the service of social and environmental values. impak Coin is their modern version, amped up because of its capacity to support locally-rooted initiatives and to marshal the forces of a global community of people that are willing to combine the power of capital and technology to change the world. impak Coin will harness that power and use it to sustain and grow the impak.eco social network, and consequently, the Impact Economy.

What is Impak Finance?

Impact organisations are small businesses, environmental companies, organic farmers, sustainable companies, housing for the poor, education, etc. In short, companies that are fundamentally “making a change in the world.”

Why a is Impak Finance using a cryptocurrency?

To accelerate the growth of this platform dedicated to the impact economy – impak.eco, impak Finance is launching a cryptocurrency based on blockchain technology. impak Coin (MPK) combines the advantages and functionalities of complementary currencies, rewards programs, and new cryptocurrencies. MPK’s objective is to encourage and reward impak.eco user’s participation, and ultimately grow the impact economy.

Furthermore, there is from impak Finance the will to innovate, to build a new use case for cryptocurrencies, because we believe that blockchain technology will have a disruptive effect on the world of finance. Could we have launched a complementary currency without making it a cryptocurrency? Maybe. But remember the early 90’s. Back then, you had the option of sending a fax, or sending an email. A choice between being ordinary or being modern. We would have been the people sending emails. That’s why we made the impak Coin a cryptocurrency.

What are the three main advantages for the impak token holders?

From the outset, a purchaser of impak Coins believes that there is merit in growing the impact economy and is ready to contribute money to build a platform that aims to achieve that purpose. The impak Coin is a vehicle to harness the power of the capital people use to promote their opinions and values regarding the economy.

More specifically, the MPK will provide the following advantages to its holders:

What is in it for the creators and founders of this project?

impak Finance’s main mission is to grow the impact economy. impak.eco and the MPK are the foundations of its project to build a new chartered Canadian bank dedicated to that sector. A bank that would be intimately connected to real businesses that are doing well and doing good. Why a bank? Because it is the single most powerful agent for economic development. It is the link between the three clienteles of impak.eco: Investors, Impact Companies and Individuals. The impak Bank will be a game changer.

Will the bank happen over night? No. It’s the long-term vision. In the meantime, instead of the Bank, we will put an entity called impak Capital at the centre of the ecosystem. It will have two mandates: First, to create a Fund that will start lending to SMEs in the impact space and leverage the presence within the ecosystem of professional and retail investors to directly help businesses that do good. Second, to set up an investment bank that will match value aligned capital and small impact businesses so that they can have access to the capital they need to grow.

As founders, we’re in this for the long game. This isn’t a speculative play on the value of the token. We will use the proceeds of this ICO to build impak.eco so that we can achieve our vision.

Will Impak investments be on loans or equity?

Unsure of the meaning of your question. If it’s related to the nature of the impak Coin, it is considered an investment product but since it is a cryptocurrency, its classification with regards to Securities law is unclear.

If your question is related to our activities in the impact space, as indicated above, our first product in the market will be the impak Debt Fund 1, a fund tailored to the needs of growing impact SMEs that are looking for an alternative source of lending. We’ll be issuing loans between $100k-$1m to start with, to companies with 2 years of existence and at least $1m revenues. If you don’t fit within these criteria and are looking for equity, we’re also on our way to obtaining an EMD licence, and as such we’ll be able to help impact companies attract equity by connecting them to our growing network of investors interested in impact.

Is an Impak Coin a token or a share in Impak finance or both?

A token. The impak Coin is not a share of impak Finance.

Do you envisage dividends to be paid to impak shareholders in the future?

Again, it is important to distinguish between the impak Coin and common shares of impak Finance inc. The latter provides their holders the usual rights common shares provide, including dividends if the company is in a position to make such distributions and chooses to do so. In the case of impak Finance, because the company is in its startup phase, the discussion around dividends is premature.

What are the economics of ImpakCoin? (total coins, inflation rate)

What are the technical details of ImpakCoin?

It is built on a decentralized technology called the Waves Platform.

It has a centralized Governance Body to accomplish the following:

What are the main events during the proposed roadmap?

*this timeline may change and differ in time and impak Finances reserves the right to modify one or all of those date.

We thank Eve Montpetit for the interview.

Is Bitcoin A Profitable Investment?

Difference Between Loans And Lines Of Credit