MASS is a crypto fund which will invest in Masternodes and Staking coins, in addition, they could also consider investment in specific services such as Storj.

Such services are needed by cryptocurrencies or crypto projects to manage their systems. This crypto-infrastructure enables the projects to provide users value, which is needed because of the decentralised nature of these projects. Mass removes the headache of creating master nodes and having staking wallets online 24/7.

An interview with Clinton McLeay one of the co-founders of Mass.

What does Mass stand for?

MASS stands for [M]asternode [A]nd [S]taking [S]ervice. The acronym is literally what it is. I debated getting “geeky” with the name going with a recursive acronym that references itself but I worried that might confuse some people, so keeping it simple was what won.

Who is the team behind MASS?

As far as references, all 4 of us have very strong automation/security/systems backgrounds, hopefully, that will be evident in our LinkedIn profiles from the White Paper, Kris is also fairly well known in the cryptocurrencies community I believe, he has assisted ‘coin’ development with quite a few projects as well as creating NEOS the cryptocurrency. Kurt is our solidity programmer, and while he doesn’t have any other Solidity projects under his belt, he does have a Masters in Computer Science, and took to Solidity like a duck to water.

We feel that our experiences with systems automation, security and backend development tie perfectly with PoS and Masternodes, as you may know, some of that stuff can be very daunting for users who may not be extremely tech savvy when it comes to setting up their own nodes and security.

Where will the company be incorporated?

The company is already Incorporated in Hong Kong, Mass Cloud Ltd. This was done through a company called Otonomos, which is actually another ‘blockchain’ based company. All of the procedure is done on the blockchain and encrypted with mnemonic passwords to access it.

We wanted to use them because of the technology, everything we are trying to do we want to do it as modern as possible, any distributed technologies or block chain or just “cool” technologies we want to use/support.

You can verify this by going to https://www.icris.cr.gov.hk/csci/ -> Click Unregistered user -> Click the top two check boxes -> Then you can search for MASS Cloud Ltd.

Will the company be audited and will the full audit results be shared with
the token holders?

What are the benefits for token holders?

Ease/Convenience in a diversified portfolio of Proof of Stake and Masternode crypto currencies that they might not have even known about before (I know that speaking to some people who have heard of the project, some didn’t even know what Masternodes were), an easy way to “multi coin stake” to earn ethereum, and also MASS is a token that is constantly gaining value from the underlaying assets that it represents. 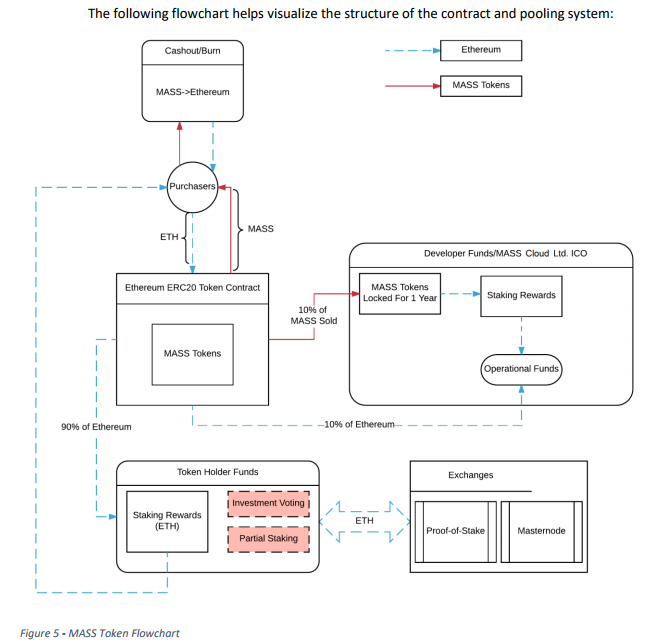 How will the masternode and staking portfolio be built?

The portfolio will be built at the start based on a select group of coins that we will announce publically, all masternodes/staking addresses will be public, as well as broadcast onto the second Ethereum contract we have, which is a ‘transparency/trust’ contract. In the White Paper this is outlined a bit, but basically, everything that is done will be publically available at all times. We will have a ‘Dashboard’ interface that will let people see this easily, but since it is built to be on the blockchain as well, people can query it themselves or make 3rd party tools for visualising it all.

In the future, the crowd will have a say on new parts of the masternode and staking portfolio?

Yes in the future (short term future) the voting contract will allow for users to vote on new parts of the portfolio, the vote at the moment will be weighted to be the more MASS you have the more weight your vote is, much like more traditional companies and the shares. This might be changed in the future if it works best for the userbase to modify it.

Is the crowd intelligent enough to make portfolio decisions?

Possibly, possibly not :). It is a bit of an experiment with that, although ultimately we will act as gatekeepers on the portfolio, at least in the short term forecast, to make sure no gamification can happen etc.

What is the purchasing strategy to avoid price spikes when buying x11 coins?

Certain coins will have to be bought slower than other coins, we have also talked a bit about purchasing off market in order to not effect prices too drastically.

Does Mass plan to diversify into micro-cap x11 coins?

We believe that diversification is key for the success of this project. We also plan on getting into future ICO’s of new PoS/MN coins. Also PoS/MN isn’t going to be the only thing, as new forms of consensus come out we will branch out (although the name will stay the same, even if it isn’t traditional ‘staking’ or ‘masternodes’)

Will all the staking coins and masternodes be in the same data centre?

No, this is all part of our belief in security/decentralisation.

Will Mass be using any third party services to stake or setup masternodes?

We will be doing it all, and all of that is automated, no need for 3rd party services.

How will ongoing costs be paid?

That comes from the 10% Ethereum raised in the pre-sale and ICO, that will be used for servers/infastructure costs, future development costs, legal, pr, etc. We have a lot of experience in this and have access to a fairly deep talent pool, so we can keep our costs quite low, that will also cover the transaction fees and gas fees for sending out block rewards as well as publishing the ongoing ‘transparency audit’ onto the blockchain. That will be more than enough to cover the first year, at which point our 10% share of MASS will be able to kick in going forward to pay for everything. The goal is to have everything as autonomous as possible. Eventually we think that the entire project can live 100% on the blockchain through distributed virtual machines (obviously down the road).

When will the earnings be paid to token holders?

For now, this will be daily, but we will monitor how it performs once the ICO is over, because it really depends on the distribution of tokens and the amount of people staking. It is a bit of a balancing act, we want rewards to be paid often, but also we want to make sure that it isn’t being wasteful. Daily at the start, but we will probably vote on this after it has been running a bit to get users opinions.

What percentage of the earnings will be paid to token holders?

100% is paid to token holders, we take no fees, the original 10% of Eth will cover any fees, and we will not be earning anything from this until 1 year is up and our 10% share of MASS unlocks  will be our ‘earnings’, and will also be used to further pay any fees/operations.

Can investors loose their dividends if they do not claim them within a certain period of time?

No, they aren’t really dividends as much as staking rewards, you have 2 choices (more choices will be available in the future after the ICO, such as lending your rewards back into the pool)

1) stake, this is a function built into the smart contract that you execute (either through the dapp, through a contract interface, or through a dashboard website) that effectively locks your tokens into ‘staking’ mode. Once they are locked in staking mode you don’t have to do anything, ethereum will be sent to you daily (or whatever the future pay schedule is, this will also have other options tied to it in the future, such as the ability to set a pay threshold etc). So there can not be any losing of rewards.

2) unstake/notstaked, this is the default state of MASS, any unstaked tokens will have their block rewards reinvested into the MASS pool, thus increasing the overall value of MASS and the underlaying assets. (eg people who are trading it on an exchange, the assets that their MASS represents will be constantly growing the entire MASS pool) 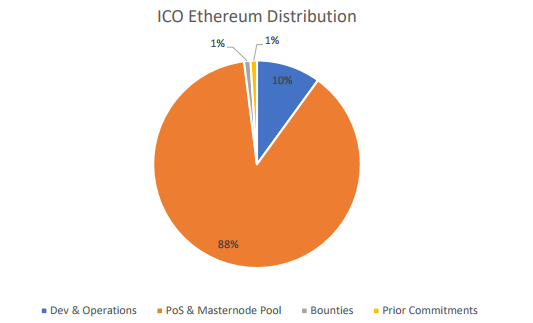 How much of the total ICO proceeds will be invested in masternodes and
coins staking directly?

88% of the Ethereum raised will go directly to that. 10% Ethereum for ongoing operations/develoment/everyothercost 1% to bounty programs 1% to prior commitments.

So a very large percentage will go directly to PoS/Masternodes right from the get go.

Will Mass invest in ICOs?

What are the key dates for the ICO?

The ICO itself is at a future date tbd, depending on the interest of the pre-sale we will push it up, but we are shooting for roughly about 1 month from the pre-sale date, so roughly speaking mid August for the ICO. The ICO date is mostly to give time for more marketing, as we have been fairly low key on the pre-sale, our intention is to have it hopefully not sell out instantly, which is why we have been more ‘low key’ and not super heavy marketing for the pre-sale. That being said, if the pre-sale has a lot of interest, we don’t want to keep everyone waiting for a month if based on the interest the ICO will also sell out fairly quickly and we have everything ready to go.

What are the requirements to qualify for the pre-ico ?

That you have an erc20 compliant Ethereum wallet, do not send from an exchange, only from a wallet such as myetherwallet.com (beware that you use .com and none of the other addresses floating around lately as there have been a lot of phishing attacks targeting them), Parity (our personal favourite), mist etc

There is no min, and no max, you just send to the pre-sale address and you get pre-sale MASS (this won’t be the real MASS, this will just represent your pre-allocated MASS when the ICO begins)

What are the requirements to qualify for the ico?

Same as the presale, erc20 compliant Ethereum wallet, no min no max, nothing special.

We thank Clinton McLeay for the interview.

IceRockMining: A Bitcoin Mine In A Kazakhstan Cave

Greenstat AS, Your Chance To Invest In A Green Energy Norwegian...

Selling Your Startup? 6 Top Closing Costs You Should Be Aware...